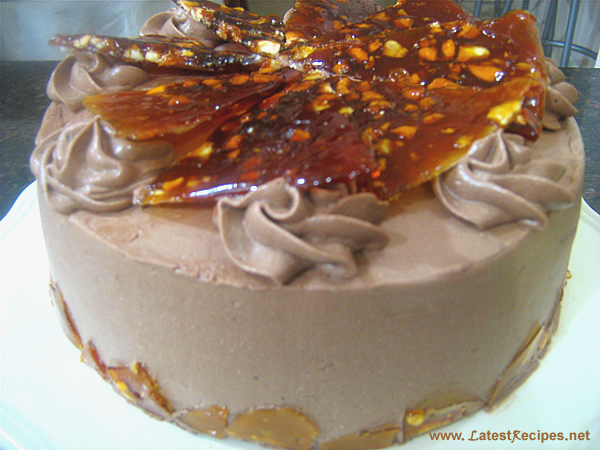 My 2nd DB challenge.. The August 2009 Daring Bakers’ challenge was hosted by Angela of A Spoonful of Sugar and Lorraine of Not Quite Nigella. They chose the spectacular Dobos Torta based on a recipe from Rick Rodgers’ cookbook Kaffeehaus: Exquisite Desserts from the Classic Caffés of Vienna, Budapest, and Prague.

I was happy when I learned that this multi-layer cake will be our next challenge. I love to bake and decorate cake, I could practise and learn more with this, this cake will pose enough challenge for me, I have tried this cake before when I just started baking.. and failed. I only had my good old wire whisk with me and a wooden spoon at the time but that did not stop me from trying, I figure if bakers in the old days can do it without any gadgets or hi-speed mixers we have today I could do it too, but of course I was wrong. I don’t have years of experience with me or any baking knowledge, I just have the determination which wasn’t enough back then.

Now, I have learned my lesson and gained  little expertise through practice and   with the help of  my KA mixer and good old whisk, I was able to do it, yay!  Not without a snag, but hey we made it.

The recipe is lenghty, quite intimidating but as you read through it, it wasn’t really that hard, it was lenghty for a reason: Thorough explanation of the whole process and tips, without it I would have been loss in my own kitchen and will take forever to finish. 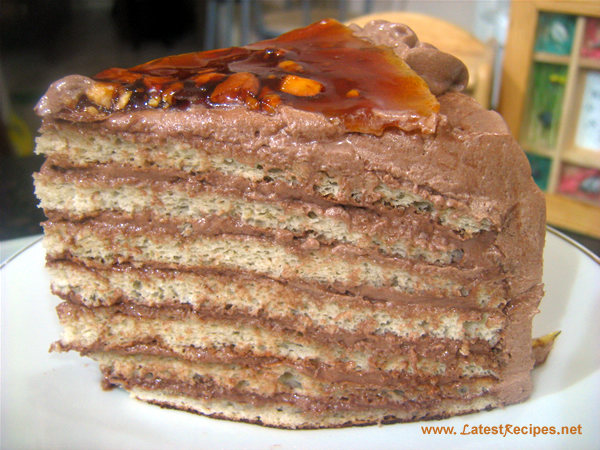 I burned the first layer that I baked but I was able to save it still, it’s there at the very bottom of the cake. I intended to put dulce de leche whipped cream as filling then cover the whole cake with chocolate whipped cream but the cream with dulce collapsed so that gave me an excuse try my luck again at Italian buttercream. It was a success this time! I added 3 0z of melted bittersweet chocolate to about 1 1/4 cups of buttercream.

Now for the hardest part:  The caramel topping. I decided to make cashew ( hazelnut was out of stock) brittle instead. I had a hard time with this, I don’t know why caramel has to be so tricky to make, I kept an eye on the pot of boiling sugar, waiting for it to turn golden,  I turned my back for a sec to scoop the buttercream into a piping bag, when I looked back at the pot, it was already starting to burn. I almost lost it. I turned off the heat immediately and added 1/4 cup of chopped cashewnuts before pouring it on the parchment paper on the baking sheet. I drew lines in it to make 8 wedges. I did it, except I couldn’t get the paper off of the caramel wedges. I tried and tried but to no avail but since the paper is not noticeable anyway, I decided to use it still, we just couldn’t eat it.

On decorating the cake: I wanted to make it look like the dobos torta I tried before where the caramel wedges rests on piped buttercream rosettes instead of hazelnuts, the caramel shards was just a last minute thought. I remember seeing one daring baker from the forum who did it and I thought it was a great idea. I just use it on the border though, it added a nice crunch to the cake. 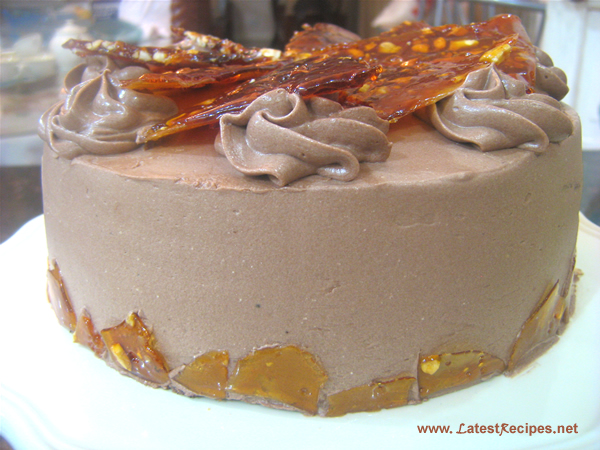 The Dobos Torta is a five-layer sponge cake, filled with a rich chocolate buttercream and topped with thin wedges of caramel. (You may come across recipes which have anywhere between six and 12 layers of cake; there are numerous family variations!) It was invented in 1885 by József C. Dobos, a Hungarian baker, and it rapidly became famous throughout Europe for both its extraordinary taste and its keeping properties. The recipe was a secret until Dobos retired in 1906 and gave the recipe to the Budapest Confectioners’ and Gingerbread Makers’ Chamber of Industry, providing that every member of the chamber can use it freely. 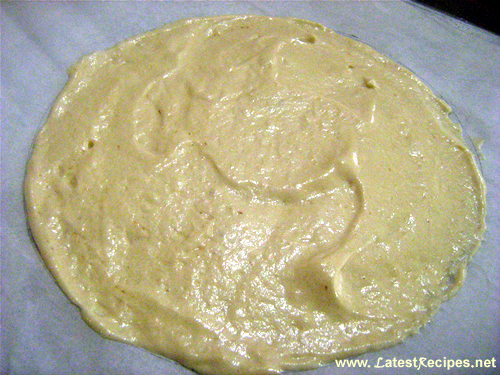 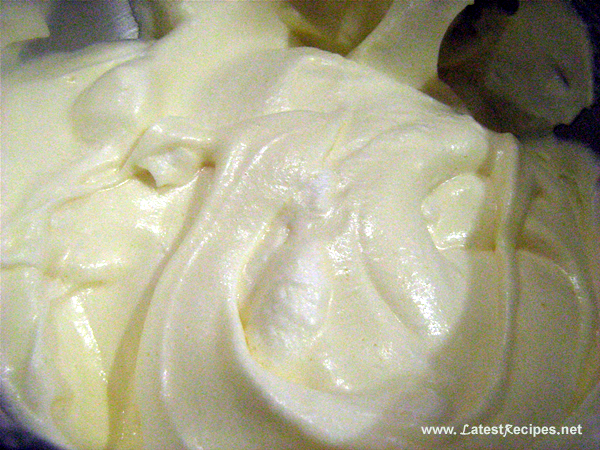 Directions for the sponge layers:

NB.  The sponge layers can be prepared in advance and stored interleaved with parchment and well-wrapped in the fridge overnight.

2.  Cut six pieces of parchment paper to fit the baking sheets. Using the bottom of a 9″ (23cm) springform tin as a template and a dark pencil or a pen, trace a circle on each of the papers, and turn them over (the circle should be visible from the other side, so that the graphite or ink doesn’t touch the cake batter).

3.  Beat the egg yolks, 2/3 cup (81g) of the confectioner’s (icing) sugar, and the vanilla in a medium bowl with a mixer on high speed until the mixture is thick, pale yellow and forms a thick ribbon when the beaters are lifted a few inches above the batter, about 3 minutes (You can do this step with a balloon whisk if you don’t have a mixer).

4. In another bowl, using clean beaters, beat the egg whites until soft peaks form. Gradually beat in the remaining 2/3 cup (81g) of confectioner’s (icing)sugar until the whites form stiff, shiny peaks. Using a large rubber spatula, stir about 1/4 of the beaten whites into the egg yolk mixture, then fold in the remainder, leaving a few wisps of white visible. Combine the flour and salt. Sift half the flour over the eggs, and fold in; repeat with the remaining flour.
5.  Line one of the baking sheets with a circle-marked paper. Using a small offset spatula, spread about 3/4cup of the batter in an even layer, filling in the traced circle on one baking sheet. Bake on the top rack for 5 minutes, until the cake springs back when pressed gently in the centre and the edges are lightly browned. While this cake bakes, repeat the process on the other baking sheet, placing it on the centre rack. When the first cake is done, move the second cake to the top rack. Invert the first cake onto a flat surface and carefully peel off the paper. Slide the cake layer back onto the paper and let stand until cool. Rinse the baking sheet under cold running water to cool, and dry it before lining with another parchment. Continue with the remaining papers and batter to make a total of six layers. Completely cool the layers. Using an 8″ springform pan bottom or plate as a template, trim each cake layer into a neat round. (A small serrated knife is best for this task). 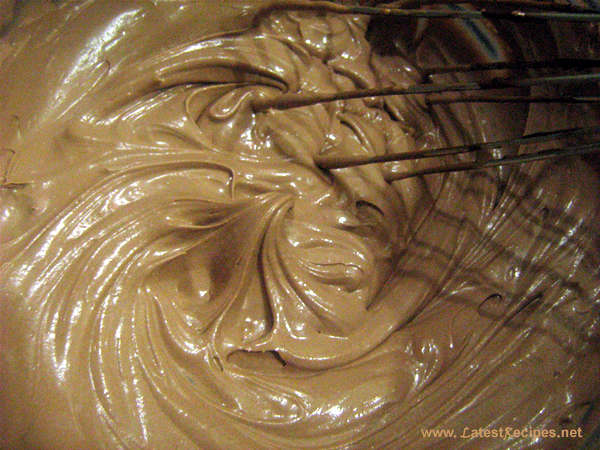 Directions for the chocolate buttercream:

NB. This can be prepared in advance and kept chilled until required.

1.Prepare a double-boiler: quarter-fill a large saucepan with water and bring it to a boil.

2.Meanwhile, whisk the eggs with the sugar until pale and thickened, about five minutes. You can use a balloon whisk or electric hand mixer for this.

3.Fit bowl over the boiling water in the saucepan (water should not touch bowl) and lower the heat to a brisk simmer. Cook the egg mixture, whisking constantly, for 2-3 minutes until you see it starting to thicken a bit. Whisk in the finely chopped chocolate and cook, stirring, for a further 2-3 minutes.

4.Scrape the chocolate mixture into a medium bowl and leave to cool to room temperature. It should be quite thick and sticky in consistency.

5.When cool, beat in the soft butter, a small piece (about 2 tablespoons/30g) at a time. An electric hand mixer is great here, but it is possible to beat the butter in with a spatula if it is soft enough. You should end up with a thick, velvety chocolate buttercream. Chill while you make the caramel topping.

Directions for the caramel topping:

1.Choose the best-looking cake layer for the caramel top. To make the caramel topping: Line a jellyroll pan with parchment paper and butter the paper. Place the reserved cake layer on the paper. Score the cake into 12 equal wedges. Lightly oil a thin, sharp knife and an offset metal spatula.

2. Stir the sugar, water and lemon juice in a small saucepan. Bring to a boil over a medium heat, stirring often to dissolve the sugar. Once dissolved into a smooth syrup, turn the heat up to high and boil without stirring, swirling the pan by the handle occasionally and washing down any sugar crystals on the sides of the pan with a wet brush until the syrup has turned into an amber-coloured caramel.

3.The top layer is perhaps the hardest part of the whole cake so make sure you have a oiled, hot offset spatula ready. I also find it helps if the cake layer hasn’t just been taken out of the refrigerator.

Immediately pour all of the hot caramel over the cake layer. You will have some leftover most probably but more is better than less and you can always make nice toffee pattern using the extra to decorate. Using the offset spatula, quickly spread the caramel evenly to the edge of the cake layer. Let cool until beginning to set, about 30 seconds. Using the tip of the hot oiled knife (keep re-oiling this with a pastry brush between cutting), cut through the scored marks to divide the caramel layer into 12 equal wedges. Cool another minute or so, then use the edge of the knife to completely cut and separate the wedges using one firm slice movement (rather than rocking back and forth which may produce toffee strands). Cool completely.

Angela’s note: I recommend cutting, rather than scoring, the cake layer into wedges before covering in caramel (reform them into a round). If you have an 8” silicon round form, then I highly recommend placing the wedges in that for easy removal later and it also ensures that the caramel stays on the cake layer. Once set, use a very sharp knife to separate the wedges. 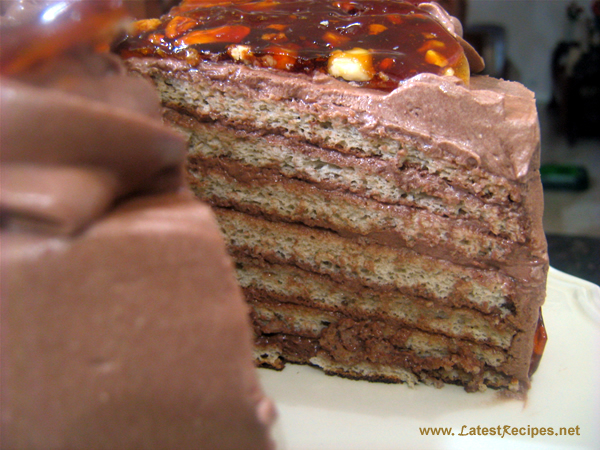 2.  Place a dab of chocolate buttercream on the middle of a 7 1/2” cardboard round and top with one cake layer. Spread the layer with one part of the chocolate icing. Repeat with 4 more cake layers. Spread the remaining icing on the sides of the cake.

3 .  Optional: press the finely chopped hazelnuts onto the sides of the cake.

4. Propping a hazelnut under each wedge so that it sits at an angle, arrange the wedges on top of the cake in a spoke pattern. If you have any leftover buttercream, you can pipe rosettes under each hazelnut or a large rosette in the centre of the cake. Refrigerate the cake under a cake dome until the icing is set, about 2 hours. Let slices come to room temperature for the best possible flavour.