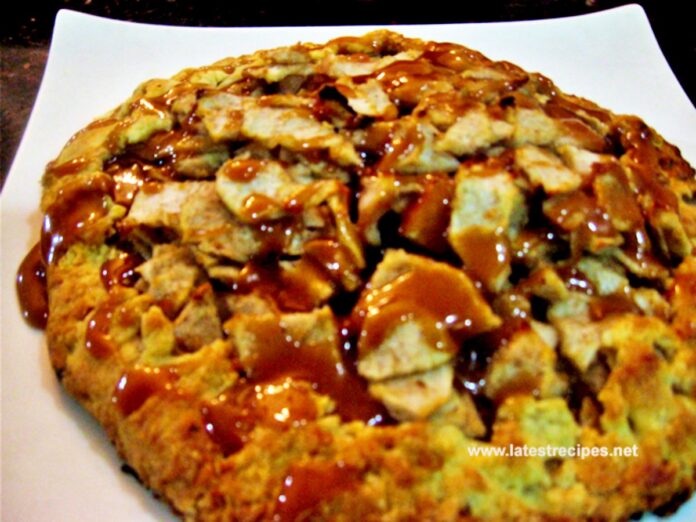 I was planning to make apple pie for my kids and my husband who have all been bugging me for days to make one, I told them I will after a trip to the supermarket, I can’t make apple pie without apples, right?

We went grocery shopping, went home with everything we need but the apples, I can’t believe there are no fuji apples available (I only use this variety for my for my pie) that time, but I don’t want to disappoint my two angels and grabbed a pack of pears.

I decided to make my lazy-day pie, the rustic free-form pie/ tart better known as crostata in Italian and galette in French. I chose this recipe from Cooking Light, I was WOWed by the photo.

It looks really yummy (although my photo is not as appetizing to look at, but hey, I made it and it definitely tastes better than it looks) and I got intrigued by the cheese in the recipe, I’ve never tried adding cheese at the bottom of the pie before.

You have got to try this one too, the pear tastes a lot like apple, but the cheese at the bottom definitely add a little something, something to the pie and the caramel, I can’t believe I almost skip this part (I knew that the caramel will harden once cooled and I don’t really like it) but I’m glad that I stuck to the original recipe.

It made a whole lot of difference. My husband love the crunch, a nice contrast to the soft filling. I loved it too; the kids? They’re just happy with their pie and still think it’s apple crostata with caramel.

FOR THE PASTRY DOUGH:

IF YOU WANT TO MAKE PASTRY DOUGH FROM SCRATCH:

This recipe is easy and fast especially if you use refrigerated pie dough but since I couldn’t find one (honestly, I did not bother looking for one ’cause I like making mine from scratch), I used my favorite crostata dough recipe from Ina Garten, I’m posting it at the end in case you too can’t find ready-made dough in your area. I don’t know the different varieties of pear, I just used the one that I bought, it’s called Early Pear (about 1 kilo).
Keyword galette dessert, galette recipe, how to bake galette, how to bake pear galette, pear dessert, pear galette, pear galette recipe
Tried this recipe?Let us know how it was!