The key to making this dish is to use fresh tomatoes and slow-cook it until the meat becomes tender, doing so releases the natural oil of tomatoes and meat…it’s simply delicious.

This is one of my favorite dish to cook when tomatoes are in season and this is perfect when you are busy, you can make it ahead of time; like, I cook it while making lunch for example and I just leave it on the stove simmering on very low heat for about 1-2 hours and I know that dinner is already taken care of.

Sarciado is more commonly done with fish, you fry the fish first and then pour the sauteed tomatoes over it, you can also do it with left-over fried fish they are both delicious but I like the pork version better because it’s really something when the pork is slow-cooked and gets really, really tender, I don’t know how to describe it… maybe you know what I’m talking about, or not..just try it for yourself to find out.

I usually use the kasim or shoulder part cut of the meat because they are more tender then I mix in some liempo (pork belly) for more flavor. I’ve done this dish with chicken and it’s just as good, I have got to try it with beef sometime. 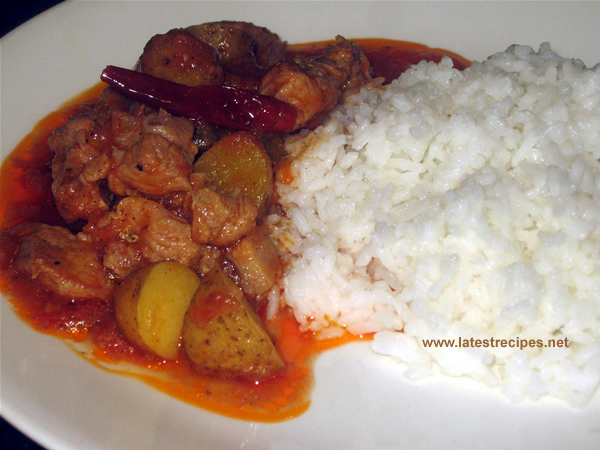 Olive
The key to making this dish is to use fresh tomatoes and slow-cook it until the meat becomes tender, doing so releases the natural oil of tomatoes and meat...it's simply delicious.
5 from 1 vote
Print Recipe Pin Recipe
Course Filipino Ulam, Main Course
Cuisine Filipino, Spanish
Servings 4 people