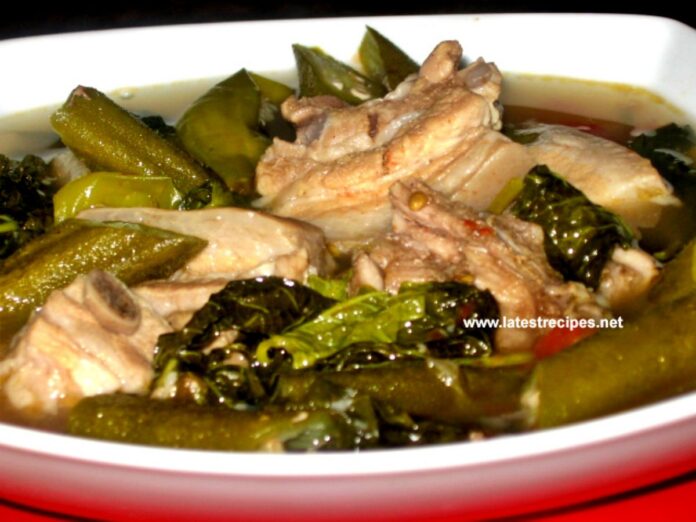 Pork sinigang is my favorite filipino dish because not only it is delicious but it is also easy to cook.   If you know how to boil water, you can cook sinigang, because it is basically that- boiling meat and vegetables.

Sinigang loosely translated in English means pork boiled in tamarind broth, but sinigang is not exclusively pork and tamarind, there is a fish sinigang, and sinigang na hipon (prawn sinigang), there are also sinigang using other tart fruits like Santol or Bayabas (guava) and even young tamarind leaves used in sinigang sa dahon ng sampalok usually done with chicken.

When I was young, sinigang was done using raw tamarind fruit. It is boiled together with the pork, when the tamarind gets soft or tender, it is fished out of the soup, I was assigned the task of mashing the tamarind with some water before it is strained back into the soup.

You really have to put a lot of tamarind just to be sure that you have enough to make the broth tart but fortunately we now have sinigang mixes available in the market even in other countries through asian food store so Filipinos working there won’t miss it.

As much as I love this dish though, I don’t cook it as often as I used to because I can’t stop myself from eating too much of it. I can eat 4-5 cups of rice with this, no kidding.. there was that one time, I ate too much that I got bloated, I can hardly breathe, I don’t know what came into me, I just can’t get enough of the pork fat and kangkong in it.

Before, I used to deliberately add lots of fat when making pork sinigang and cook it to almost “melt- in-your- mouth- tender” ( I think the term in Filipino is “sinuso”) then I add plently of green chili peppers and kangkong leaves…yumm!

But, as much as I like that a lot, I don’t want to encourage anyone to do the same, in fact I switched back to a normal sinigang recipe, my husband and I are in our 30’s, very healthy and fit (Thank God) and wants to stay that way for our kids.

So what I’m posting here is my sensible but still yummy sinigang with a reasonable amount of fat and lots of veggies. 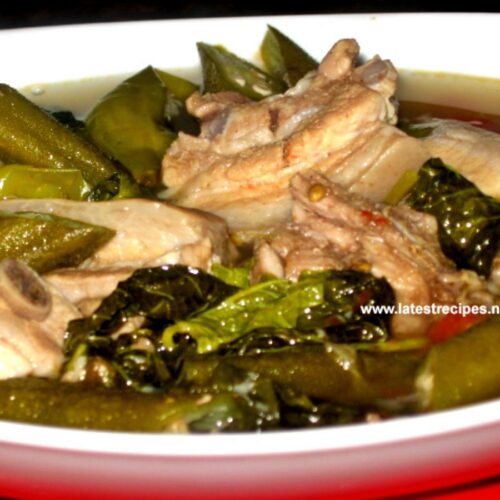 Olive
Pork sinigang is my favorite filipino dish because not only it is delicious but it is also easy to cook.
No ratings yet
Print Recipe Pin Recipe
Course Filipino Ulam, Main, Main Course, Ulam
Cuisine Filipino
Servings 4 people

1.) Typically sinigang uses buto-buto (the cut of meat with bones for making soup stocks), you may use that. Use less okra if you’re adding sitaw, we don’t like string beans so I don’t always add it. you may also add radish if you like, which I don’t so you won’t see any in this recipe. 2.) Don’t throw away the leftover soup, you can heat it next time, strain it and serve alongside your next meal. You can keep left-overs for 1 day, reheat to boiling before serving.
Keyword filipino pork sinigang, how to cook pork sinigang, pork in tamarind broth, pork in tamarind broth recipe, pork sinigang, pork sinigang recipe, sinigang, sinigang recipe
Tried this recipe?Let us know how it was!