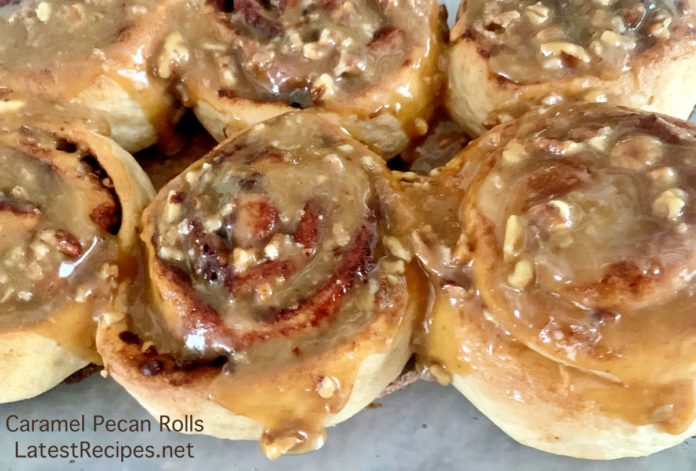 Sweet luscious caramel glaze with pecans on freshly baked soft cinnamon rolls and a hot cup of coffee is perfect anytime on a lazy weekend when you just want to unwind and relax and forget even for a short while that that the world we live in now is not the same anymore and there is no certainty of it going back to the normal that we’re used to.

Hope the second half of 2020 will be a lot better for everyone.

Anyways, these delicious sweet bread is good anytime of your worry-free day or weekend – have it for breakfasts, or an afternoon snack or late night snacking…

I just wish I could eat only ONE of these but I’m a weak person when it comes to something that makes me happy. They’re just too good. Besides, I knead dough by hands so I don’t feel that guilty because I already did my workout for the day. 😀

I’ve always wanted to make cinnamon pecan rolls but since cinnamon rolls are basically the same, and I’m already very comfortable making it, I don’t want to bother anymore with the caramel pecan rolls.

But one day I turned on the TV and saw a feature on giant cinnamon pecan rolls…OH MY! They looked so tempting. Mama wants it. Bad..ly.

I was disappointed on my first try, though. The caramel pecan on the bottom of the pan got stuck and half of the rolls didn’t get the delicious topping and I accidentally got a burn on my foot with the caramel dripping from the spatula. That was so careless of me.

I also didn’t like that the caramel hardened after a few minutes. But we finished it anyway because it’s still cinnamon rolls..without the yummy cream cheese glaze.

Anyway, I decided I’m not gonna make that ever again. Not that way. I thought I could just make caramel or butterscotch and add pecans and pour that gooey caramel over the hot rolls just like the cream cheese glaze on cinnamon rolls. I’m sure no one would mind.

It’s so much easier.

The thing with caramel it that it can be too cloying so don’t forget to add the salt. Adding flour de sel (if you have it) on top is even better.

For the cinnamon rolls dough, you can also use this dough recipe with sweet potato, it’s my favorite.

The recipe below is based on this old favorite. I added mashed boiled potato to make the dough softer.

it tastes just as good as it looks

Add one cup of flour

Stir well until dough comes together, do this by hand using a wooden spoon or use a mixer

Turn out dough onto a floured surface and knead by hand until it becomes soft and elastic. Form into a ball (no picture)

Cover and let rise until double in size. Dough will be soft but it’s not sticky

Roll out into a big rectangle using a rolling pin. Brush with butter and sprinkle cinnamon pecan filling, leave a margin of less than an inch on all sides

Roll starting on the long side near you and pinch to seal the edge. Cut into 16, 12 or 8 equal pieces

While rolls are in the oven, make the glaze by melting brown sugar and butter in a saucepan, add chopped pecans

Then add cream cheese or heavy cream and turn off heat. Stir until mixture is smooth

These rolls are made with sweet potato dough and I added cream cheese on the caramel instead of heavy cream. It’s just as delicious! Top with more chopped pecans (optional) 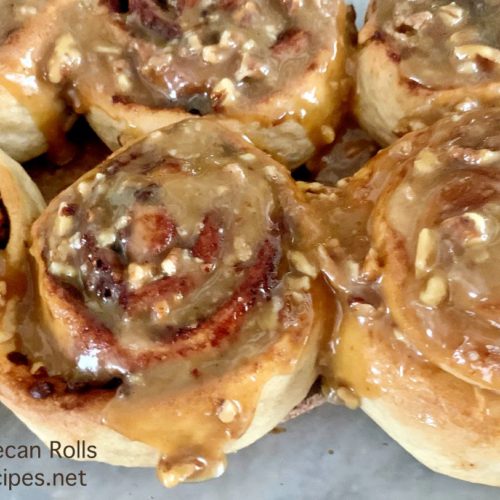 FOR THE CARAMEL GLAZE: