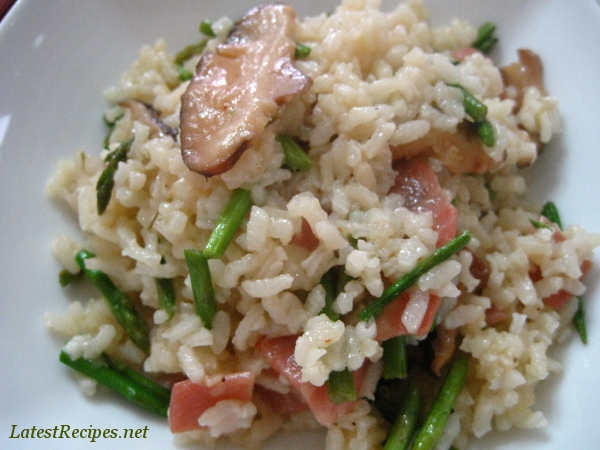 The 2010 March Daring Cooks challenge was hosted by Eleanor of MelbournefoodGeek and Jess of Jessthebaker. They chose to challenge Daring Cooks to make risotto. The various components of their challenge recipe are based on input from the Australian Masterchef cookbook and the cookbook Moorish by Greg Malouf.

I’m happy with this month’s challenge, RISOTTO is on my list of my must-try recipes but I never seem to get around making it..until this challenge..  🙂

I’ve never had risotto in my life but I’m familiar with the dish; I’ve seen it made many times in food tv shows, I felt confident that I CAN do it well…NOT. Watching it being made on TV/video is so different than actually making it myself.  It looks easy and simple to make  yes, in a way, BUT what’s hard is determining the right consistency of the risotto. Mine appears a bit dry compared to what I’ve seen in pictures.

I followed the recipe for the risotto base faithfully except I didn’t discard the onion ( I like onions) then made a version of Alton Brown’s wild mushroom and asparagus risotto. It’s the first time I’ve used Arborio rice -it didn’t get mushy even after absorbing so much liquid ( even though mine looks it). I’ve used up all my chicken stock which the rice kept on absorbing. I’m just glad it turned out delicious, which my family and I enjoyed very much,  it’s very similar to this dish, my first ever Daring Cooks’ challenge. 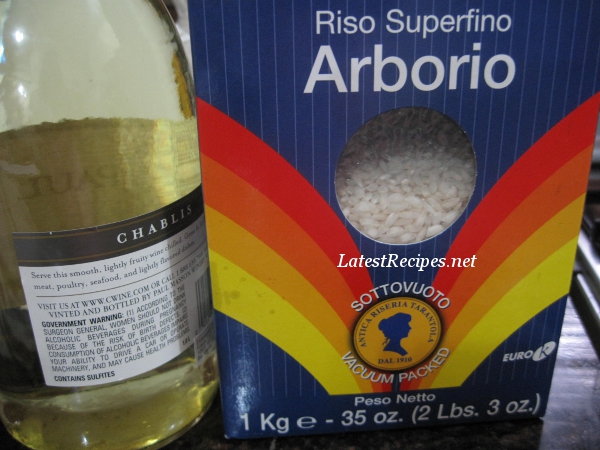 good thing I was able to find arborio rice... 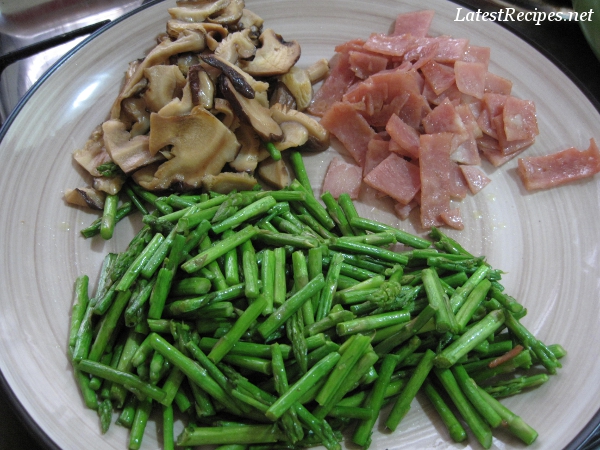 First, I sauteed the ham, asparagus and shiitake mushroom in olive oil, set aside.. 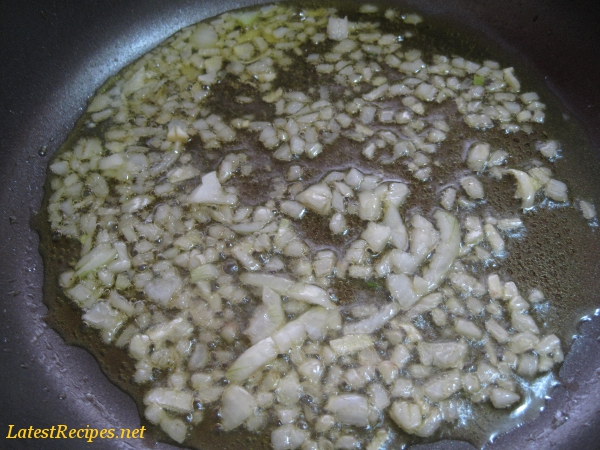 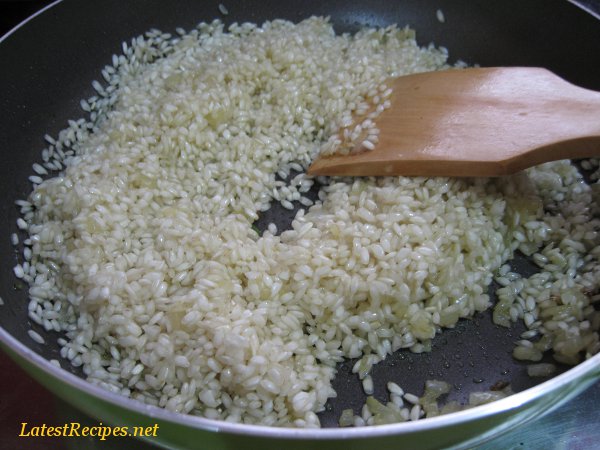 add rice and cook until the EVO oil is absorbed.. 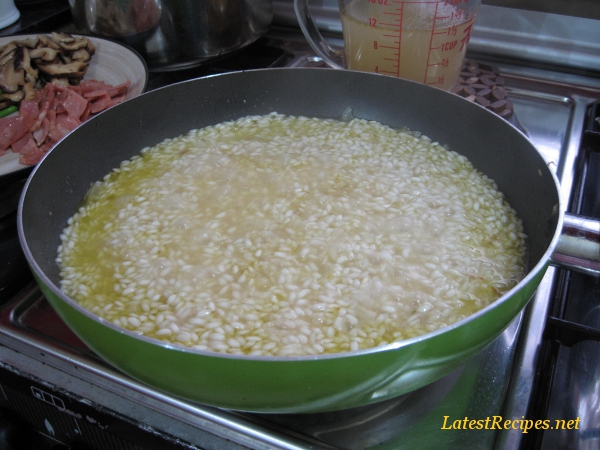 add some chicken stock, cook until the liquid is almost gone..repeat with the remaining  stock 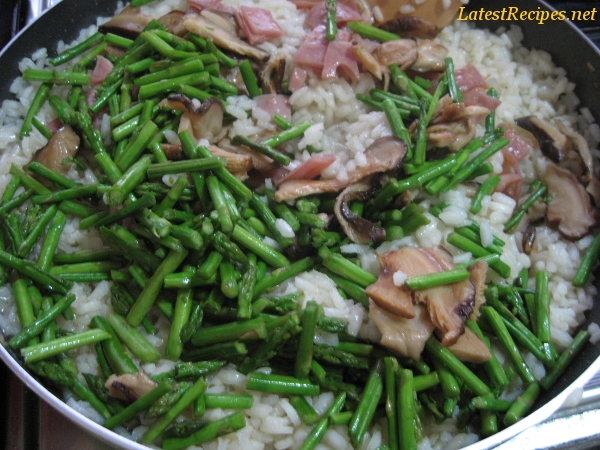 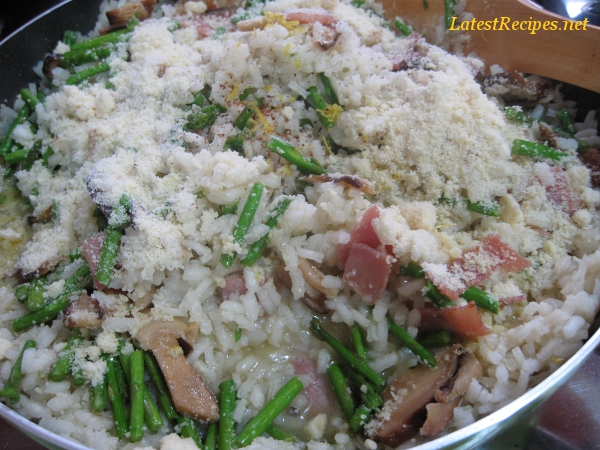 ..turn off heat and add grated parmesan, nutmeg, lemon zest..mix and season with salt and pepper 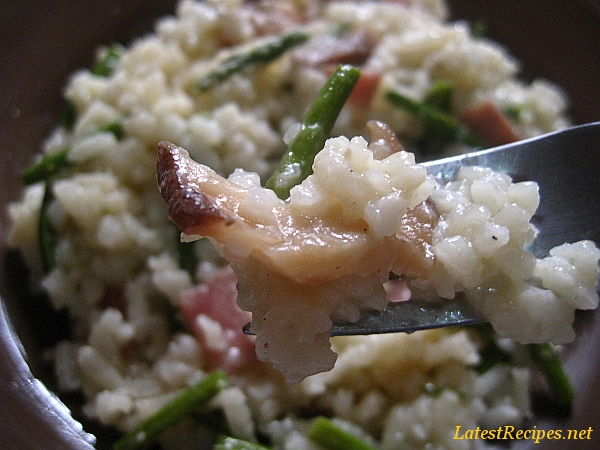 note: I didn’t use the recipe for the chicken stock, I used this one instead, the one and only I’ve been using.

1.Wash the chicken and bones and places in a 5 Litre pot, cover completely with water and bring to a boil
2.Skim away any scum as it comes to the surface
3.Add the vegetables and bring back to a boil
4.Add the rest remaining ingredients and simmer very gently, uncovered for 1.5 hours
5.Carefully lift out the chicken, set aside. The chicken meat can be removed from the chicken, shredded off and used for other things like soup!
6.Simmer the stock gently for another hour. At , at the end you should have around 2 Liters
7.Carefully ladle the liquid into a fine sieve, the less the bones and vegetables are disturbed in this process the clearer the stock will be.  The stock is now ready for use. Freeze what you don’t need for later use.

olive oil 2 fluid oz 60 ml
1 small onion, quatered
rice 14 oz 400g
Any type of risotto rice will do. I use Arborio but the recipe itself says Vialone Nano. Another to look for is Carnaroli.
white wine 2 fl oz 60 ml
chicken or vegetable stock , simmering 2 pints 1 L

1.Heat oil in a pan and add onion. Fry for a few minutes to flavour the oil then discard. (We diced ours and left it in as we like onion).
2.Add the rice and stir for a few minutes to coat each grain of rice with oil and toast slightly.
3.Add the wine and let it bubble away until evaporated.
4.Add enough stock to cover the rice by a finger’s width (about an inch or two). Don’t actually stick your finger in, it will be hot. Just eye it off.
5.Cook on medium heat, stirring with a wooden spoon from time to time, until most of the stock has been absorbed.
6.Repeat Step 5 making sure to leave aside approximately 100 ml. of stock for the final step. .
7.Repeat, save 100ml for the final stage.
8.Once you are at this point, the base is made. You now get to add your own variation.

Heat about a tablespoon of EVOO (extra-virgin olive oil) in a wide skillet on medium heat. Saute ham, mushroom and asparagus lightly. Set aside.

Make the risotto base using the same pan; add the sauteed mushroom, ham and asparagus at the end of step 8, mix well then add the reserved 100 ml of chicken stock. Turn off the heat and add parmesan cheese, lemon zest and nutmeg; season to taste with salt and pepper. That’s it! Plate up and enjoy with your family!! 🙂